100-Days is just the beginning 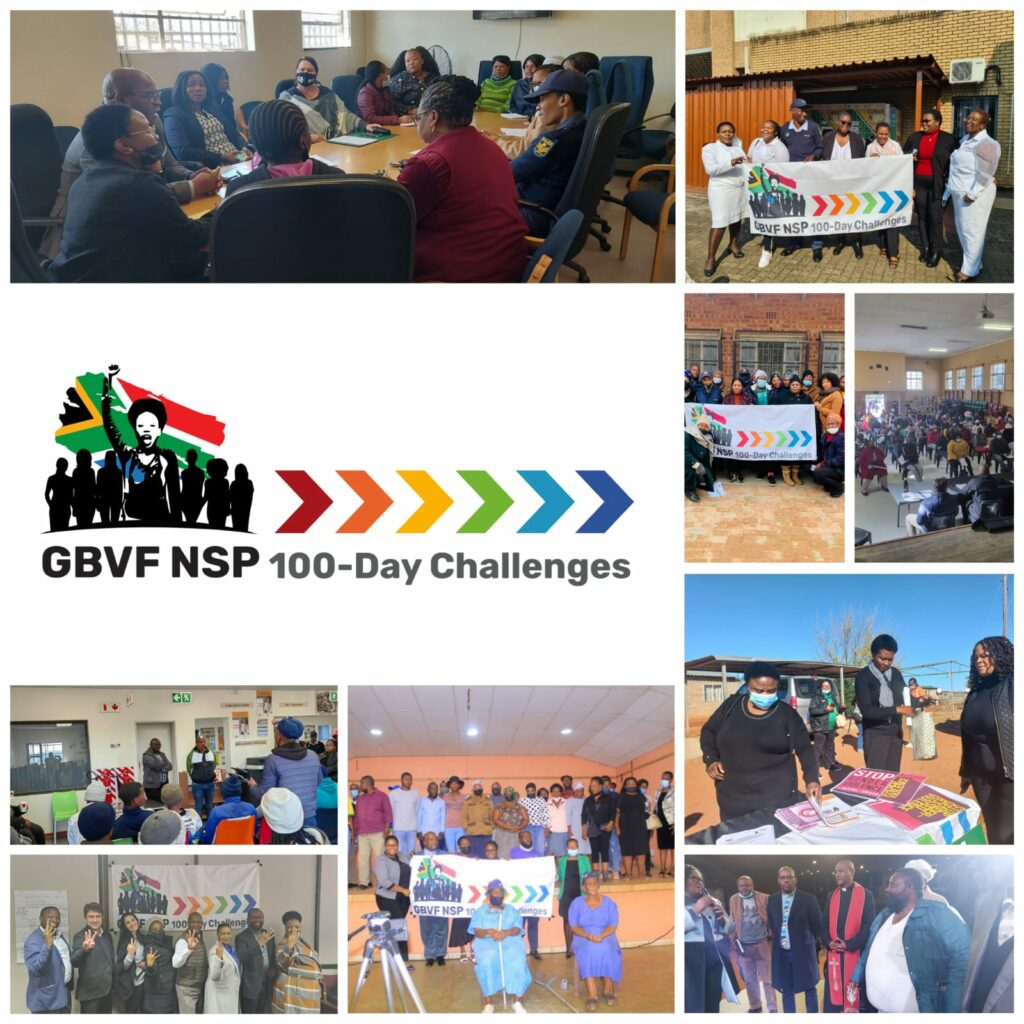 Teams reached the 100-Day mark on 9 July 2022. They have reaffirmed what the GBVF NSP 100-Day Challenge Strategic Partners have known from the start: 100-Days is just the beginning.

The resounding consensus among participants in this round of GBVF NSP 100-Day Challenges is a sense of awe at the impact of the work they have been doing since 1 April 2022 when they accepted the challenge to find new ways of working together to solve the same old problems.

Gender-based Violence and Femicide has officially been a national crisis in South Africa since 2019, yet our collective denial has meant that we have not been able to arrest it. The longer we continue to go ahead with business-as-usual, the more dangerous it becomes for womxn, children, and the LGBTQIA+ community to simply exist in this country. Unless we take radical and urgent action, we are doomed to keep trying to solve systemic problems with the same thinking that caused them to begin with.

At the outset of the 100-Day Challenges, it was hard to imagine what would be born from this incubation period where players from various sectors united behind common goals and committed themselves to a process of intense collaboration, rapid innovation, and disciplined execution. Some of the teams reached, and even exceeded, their targets, whilst others made tremendous strides in uncovering why some of the systemic obstacles persist.

The Pillar 4 team in Matjhabeng District has increased the number of GBV victims and survivors accessing psychosocial and legal support services by a whopping 259%. Team mentor, Pitso Mereko of Safer South Africa said,  “The real work starts now because we have HEARD, SEEN, WITNESSED and OBSERVED the challenges that communities are faced with. We can’t rest on our laurels because we have to sustain the momentum.”

His sentiments are echoed by Charmaine Ramasedi, the Pillar 1 Team Leader in Sol Plaatje District, Northern Cape. “It feels like the beginning,” she said. With the  firm foundation laid during the 100-Days in place, she sees the potential for 100-Day Challenges to be rolled out in cycles. “I am excited to further work on these challenges … I am still excited because this Challenge has brought so many changes, it might seem small, look small but it has brought change in our communities,” said Ramasedi.

Once people know that these are their rights, they will speak up and demand these rights. “I am really grateful that we were able to implement this in Sol Plaatje Municipality. If I can do it again, I’ll do it again,” she concluded.

The Pillar 3 team in Tzaneen worked on increasing reporting of sexual offenses in rural districts where cases historically are not reported to the authorities. Current figures show a 58% increase in reported sexual offenses compared with the same period in 2021. The team attributes this to reduced under-reporting rather than increased incidence. “I feel extremely accomplished considering the positive impact the project has achieved during the 100 days, it is not lost on me that the project has undoubtedly concretised the much needed awareness and inflamed the passions of community members to effect change. The project has left me yearning to do more,” said Refilwe Moshabela, team leader.

Government bureaucracy is a well-known hurdle amongst those who have tried to implement changes to our failing systems.  Often, the very measures in place to protect us are the thorns in our collective sides hindering us from bringing about the necessary shifts to create an environment that works for everyone.

In Garden Route District, the team discovered that haphazard inter-departmental data flow was a barrier to assigning a social worker to all suspected cases of child abuse at first reporting. As such, accessing services from a social worker prior to cases appearing before the courts was not guaranteed, which would obviously result in postponements. This flies in the face of the spirit of the very laws written to protect children in these situations.

The team have created an app to solve this problem that will be able to feed into the work being done by Integrated Justice System, which already has modules developed to improve data management within the criminal justice system. The Pillar 6 Garden Route team eagerly await the necessary permissions for a controlled trial. Although they had hoped to be able to complete the trial during the 100-Day period, they remain committed to seeing this process through as all involved recognise that this would be a game-changer.

100-Day Challenges have proven, over and again, to be such powerful catalysts for change. By creating an enabling environment for those who have first-hand experience of the problems faced when dealing with the GBVF crisis on the coal-face on a daily basis, teams are given a glimpse of what is possible when we suspend our disbelief and trust the process.

“We are really excited to have been a part of this important and landmark project. This project reminded us that when we really work together and are committed to it we can achieve more. We are also excited that looking forward we aim to adopt this model and roll it out to other parts of the province. It is sad to part with the current hard working team but we look forward to the new teams that will be established as we roll out, and sharing our experiences and lessons with them,” said Boitumelo Zwane of the Pillar 3 team in Bloemfontein that reduced the backlog in maintenance cases in their court by 82%.

We all learned what may be the most powerful lesson of 100-Day Challenges: trust your teammates and trust the process. You may not be confident about achieving your goal and you may not know how to get there, but if you keep an open heart, an open mind, and a willing spirit, magic will happen!