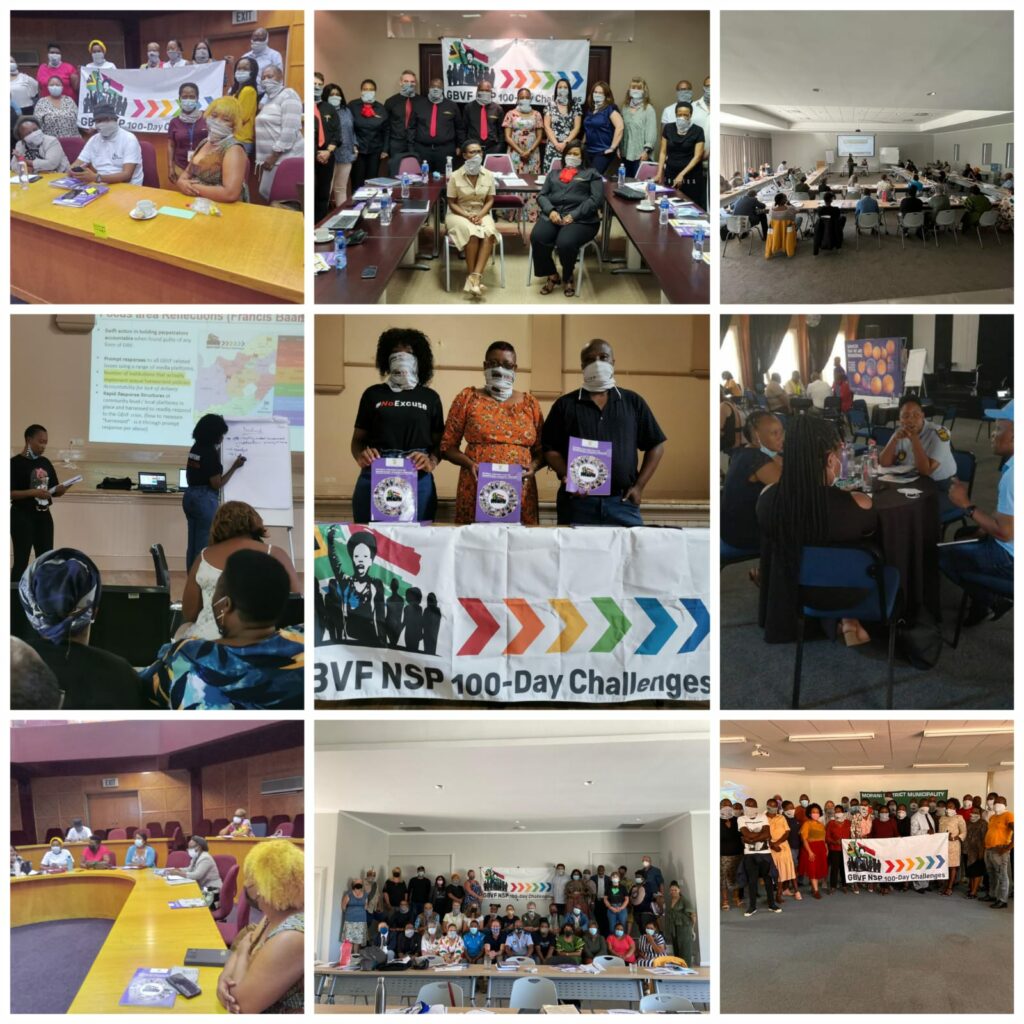 Meaningful change in 100 days? It sounds like a tall order… but is it? The 100-Day Challenge model of organising communities to take collective action has yielded incredible results in various contexts all over the world. Our seven ambassador teams are beginning to feel that organising to combat GBVF in South Africa will be no exception.

The enthusiasm and commitment were palpable at the recent design sessions with district leaders from government, civil society, and the private sector. A number of heartfelt insights emerged, along with a sense of knowing that meaningful change is possible here too.

Many district leaders came into these sessions with a fair degree of scepticism. Initially, some were hesitant because it seemed like a lot of theory. It is heartening to see attitudes shifting as participants realise it is really all about action. It is easy to envisage change, but not always easy to make it happen.

The 100-Day Challenge model provides the perfect catalyst for bringing about lasting change by institutionalising feminist principles that nurture creativity through collaboration and cooperation as opposed to traditional power-based hierarchical ways of being. District leaders’ willingness to trust the process as a springboard for innovation has set the stage and we are well on our way to solving some of our greatest societal problems by executing these plans to improve systems and save lives.

Both NSP GBVF Ambassadors and District Leaders have been pleasantly surprised at what has come out of the initial engagements. “I was absolutely delighted about the degree of collaboration, the intensity and transparency with which the stakeholders engaged and the richness and robustness of the conversations,” said Tracey Kotzen, the NSP GBVF Pillar 4 Ambassador after the Lejweleputswa event.

When we consider a problem as expansive and pervasive as gender-based violence and femicide, it is easy to think that the work we are doing is a mere drop in the ocean. Whilst the gains made in specific systems during the course of challenges may not seem significant in the face of a national crisis, these parts make up the whole, and when you consider that “business-as-usual” has not yielded any results, it captures the imagination and begs us to ask what would be possible with a bit of passion, dedication, and commitment to an unreasonable but achievable goal. Even if we don’t exactly reach the target, we will still be closer than we would have been had we continued trying to solve our problems in the same old way that created them in the first place.

Many of the stakeholders felt reassured that they are indeed on the right track. “It was clearly spelt out yesterday that the 100-Day Challenge is a step in the right direction … the municipality will also lead the localisation of the National Strategic Plan [on GBVF] and realign the IDP (Integrated Development Plan) in terms of the NSP… we are in a process of capacitating our current NGOs as well … we are all on the right track,” said Gregory Nyongane of Northern Cape GBVF Stakeholder Relations after the Pillar 1 engagement with Sol Plaatjie District Leaders in Kimberley.

Some of the districts’ problems are more complex than others which lead to some conflict when narrowing the focus area. In one of the sessions, stakeholders had such a robust discussion about the focus area that they eventually motivated for it to be changed on the basis of their knowledge and understanding of issues in their local area. “Because the NSP GBVF Implementation Collaborative selected the initial broad focus areas based on the work of the Pillars at National level, it is important to clarify how you got to the focus area and then hand it over to the experts, the local stakeholders, and allow them to really own it,” said the 100-Day Challenge gurus, Alrien & Nadim, “Collaborate, innovate, execute – that is how we change the game.”

On the whole, stakeholders across all sectors felt inspired after the leaders’ design sessions. “I feel revived and filled with the information provided – it makes it easy to contextualise the whole notion within the umbrella of NSP GBVF Pillar 6. Am looking forward to fulfilling the responsibilities ahead of us,” said Buyiswa Mayekiso, the Knysna Court Manager. “The work session in Knysna was remarkable,” said Elaine Paulse of Building the Walls, a Plett-based NGO. “Thank you for your inspiring leadership on this incredibly important cause,” said Eve Thompson, international human rights lawyer, following the Garden Route District event.

In Bloemfontein, things got heated because some participants did not agree with restorative justice instead of harsher sentences, but the Pillar 3 Ambassadors skillfully navigated this obstacle, “It is about finding new ways of doing things by working together to solve the GBVF crisis we are facing in our country. We are coming from the perspective that we want to intervene at the first sign of trouble – hence restorative justice,” the Ambassadors all agreed.

Suffice to say, all participants feel confident that these 100-Day Challenges could be the much-needed bridge to move from theory to action in implementing the NSP on GBVF at local level. “Never underestimate the power of dialogue,” said  Keamogetswe Motau of Teddy Bear Foundation, and Pillar 4 Ambassador.

The 100-Days Challenges provide a mechanism for stakeholders to work together intentionally and innovatively, and for Ambassadors to become facilitators of unity. By maintaining this spirit of cooperation and collaboration, we can indeed see an end to GBVF in our lifetimes.